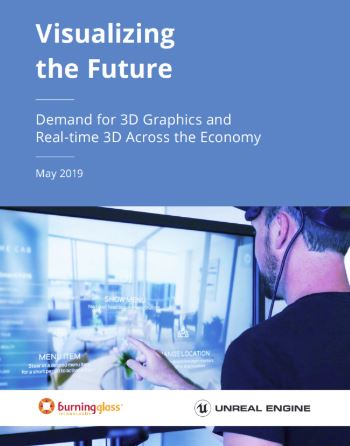 Demand for 3D technology skills is growing quickly in the job market–so quickly, in fact, that demand for these skills is outpacing the growth of the labour market overall. 3D skills, best-known for rendering immersive experiences virtually indistinguishable from real life, have now become essential in industries as diverse as architecture, manufacturing, health care, media, and entertainment.

To quantify the increased demand for these skills and to investigate factors impacting the use and adoption of 3D graphics and real-time 3D skills in the workforce, Epic Games, creators of the gaming phenomenon Fortnite, partnered with Burning Glass Technologies on a joint report, Visualizing the Future: Demand for 3D Graphics and Real-Time 3D Across the Economy. Some key findings include: